“That appears to be an unsolvable problem,” I said. I had just walked down the hill from a collapsing outhouse to hear Brian’s conclusions on the absence for our fuel bottle. Our meager possessions are laid out on the rim of a crumbling concrete foundation, but that vital red bottle was no where to be found, and our driver was just disappearing around the far hillside. We learned later that it had rolled under the backseat, and in our haste we didn’t notice its absence until too late. The driver had searched the car, and proclaimed it empty. We should have checked again.

He was clearly eager to leave us; he had never been to Old Beltir, and he appeared spooked by the decaying outpost. A 30 kilometer gravel road connects it to the main road, and there is little traffic anymore. In 2003 a massive earthquake leveled the village and tore apart the surrounding steppe and valley. Now in spring, snowmelt and ice fills the crevasses rent into the soil by the force of the disaster. In Beltir’s place is a sad collection of abandoned buildings, log huts sinking into gravel, and few outposts of habitation. Wind enough to knock down a careless walker howls through the melange of ruin and desperation.

I ask the three people I meet to call back to Koch Agash to see if we can get our driver to turn around. One boy, ageless at either 12 or 22 with features tight from sun, wind, and some childhood accident, asks for 10 roubles, a pittance, and then hands me a scratched pink cell phone with no battery. I try the town administration building, but it is bared and padlocked. This is an unsolvable problem.

Before us rises the Yuzhno Chuyisky – South Chuya Range – and our route rises from Old Beltir to a high plateau, and then up the Elangash Valley to a pass at 10,200 feet. Beyond, the Dara River drains glaciers to a track where we hope to flag down a truck supplying outlaying villages beyond the range. The track is 60 kilometers away. We consider our calories, tabulating the edible and considering speed and the unknowable conditions ahead. We decide to move ahead, knowing backward would be as difficult as forward. One safety net – a working stove – has been removed, and we will have to go faster, lighter, and more carefully. We walk through a cluster of homes beyond town with animals wandering and smoke blasting horizontal from warped stove pipes. We march into a treeless, rocky, beautiful desolation.

The following day, we pause in a storm 600m below the pass. Conditions have been deteriorating since morning as snow and sleet mixes with the 40 knot gusts in a horizontal white parallax. At the head of the valley, a last shepherd’s hut groans in the wind and we stop to lunch inside. Visibility drops, and we transition to jackets, hats, and then sleeping bags, the ultimate layer. The pass is no longer an option, and we split a bleached, toppled fence post to boil water for ramen. We sleep on platforms inside as spindrift leaks in through cracked plaster and logs blown free of their chinking.

By morning, the wind has shifted to our backs and calmed, and 6 inches have fallen. Blue sky appears in splotches. We trade boots for skis and move up towards the pass, leaving three pounds of now-useless pasta as a thank-you gift. All is ice, rock, and snow, and with no way to make water, we have a 3 liter window in which to reach open water on the Dara. We move quickly past the frozen headwater lakes of the Elangash, past the snow covered excavations of Bronze Age kurgans said to occupy the terrace between lake and mountain, and up the final slope to the pass.

Peaks surround us, and limitless options for descents. We wish for fuel, more food, and a week to dig in and ski. But time is short, and we make an attempt on a north facing slope above the pass where we can pick out a route that accesses the ridge with a few safe zones between. Halfway up the first stretch, a quick hand test reveals a expected soft wind slab from the recent storm cycle, only 10 centimeters, and a thick ice layer below. Five feet away, it is 2 cm with no energy in the snowpack, and ten feet away, more energy and 8 cm. Rocks poke through and shades of blue-white announce wind loading and clear evidence of the storm and very high winds. With so much spatial instability in such a tiny area, our line of reasoning is shaky. With evidence in multiple places of low or questionable stability, and the fact that we are in a remote range in south Siberia with a small team, we decide to ski from where we are, and continue down off the pass. We relay down 400 vertical feet of soft, we’ll-earned turns, with one unfortunate submerged rock and the resultant small tumble. The next day, we see a sizable crown and debris field on a similar aspect and angled slope as the one we decided not to ascend.

From the pass we ski down, dropping 900m of low angle terrain and dodging the emergent gorges of the infant Dara. At 2000m, the river comes to the surface below a large cornice, and we drink deep knowing our crossing and the inherent gamble was successful. That night, we dig in and kindle a fire below the first straggly larch grove. Dusk is clear, calm, and cold. We know that the earth will be open to space tonight, and it will be cold. In the frosty twilight, I amble out of the tent in boot shells to pee one last time, and am stopped by temperatures below zero and a panoply of stars and bodies beyond anything I’ve seen.

It is a wakeful night, and we eagerly descend into spring the following morning. We reach the road by 1pm, having completed in 3 days what we hoped to have 4.5 to accomplish: a 60 kilometer crossing of the South Chuya Range. Was it the first ski traverse? We have no idea. We sit on packs swaddled in jackets under a cold Siberian sun waiting. Five hours later, as we contemplate another night out with a handful of raisins between us, a giant, ancient Kamaz truck rattles over the rise. The driver, Sasha, is hauling empty gas canisters back to the road from a further village. He throws our gear in amongst the clanging tanks and laughs as we press hands to the vents of the robust heater in the cab. 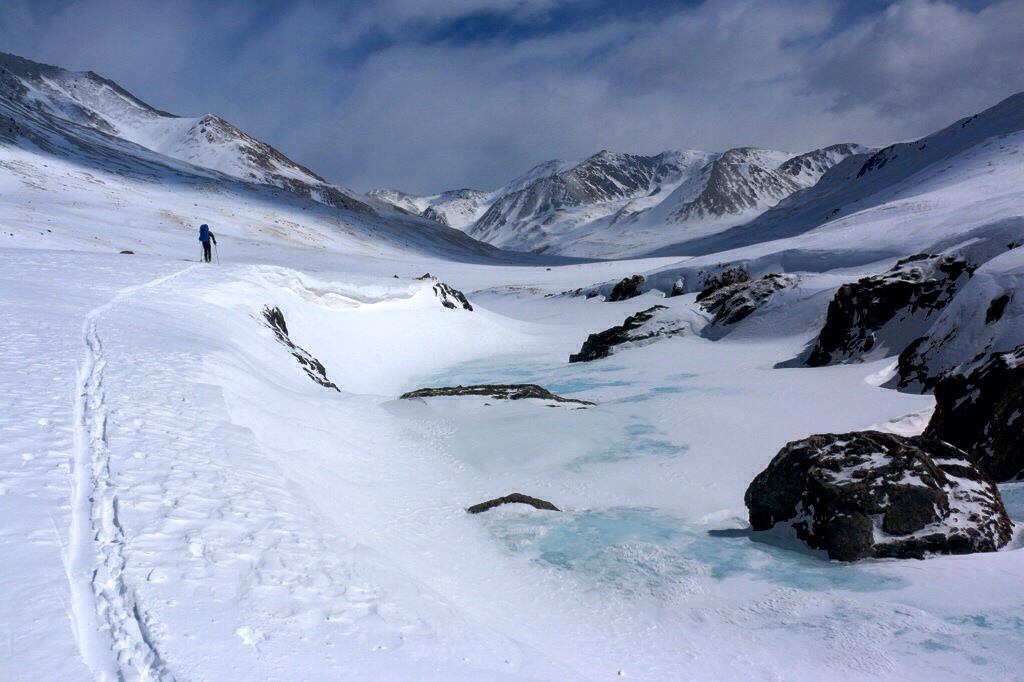 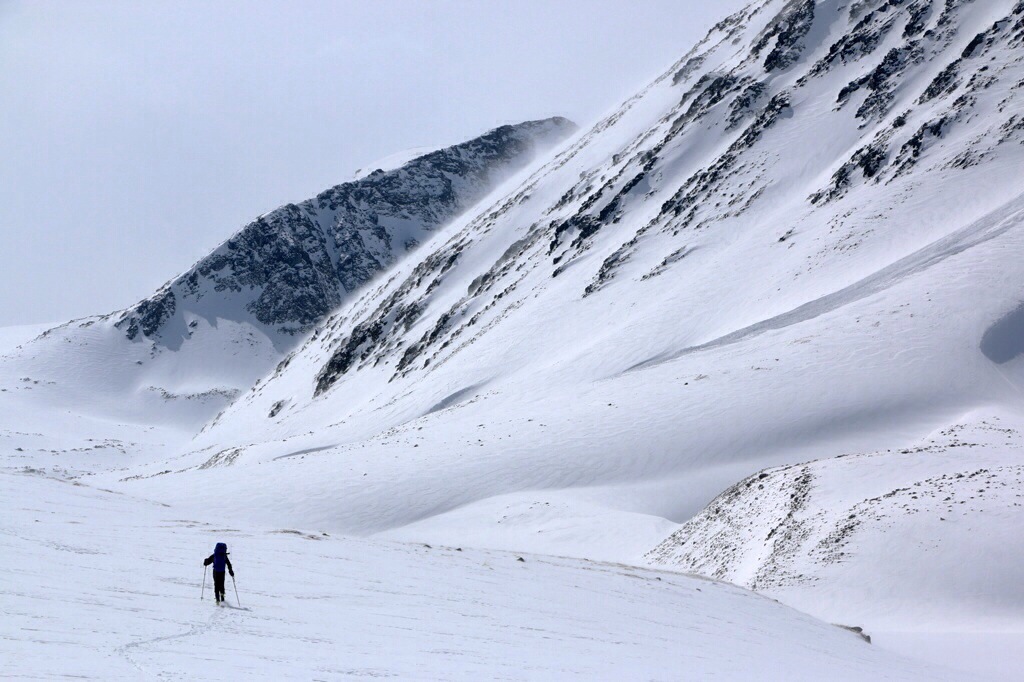 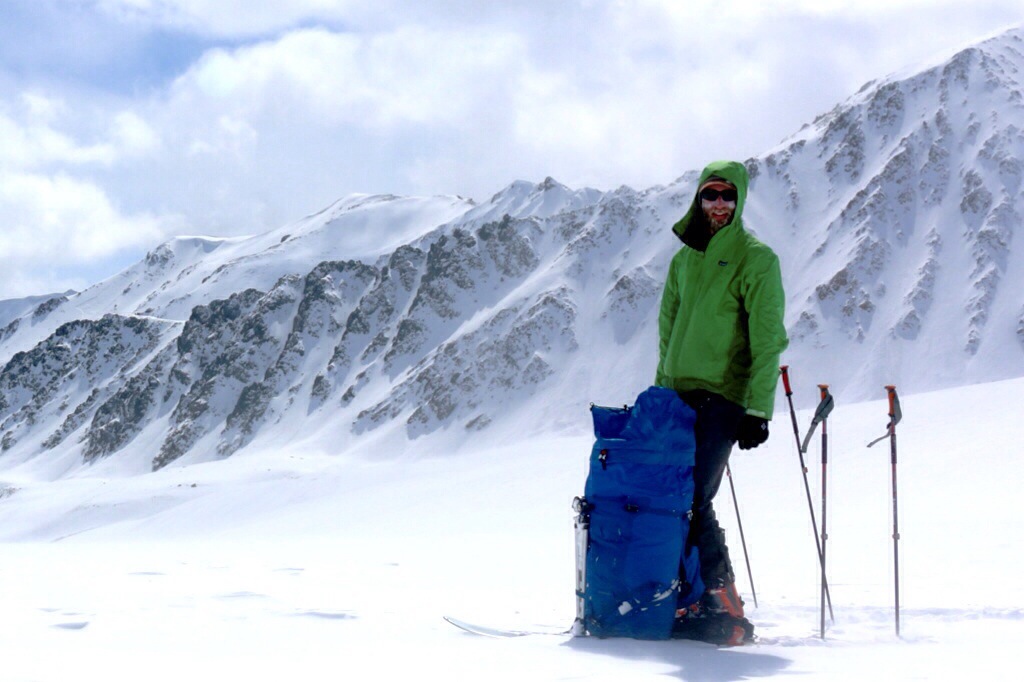 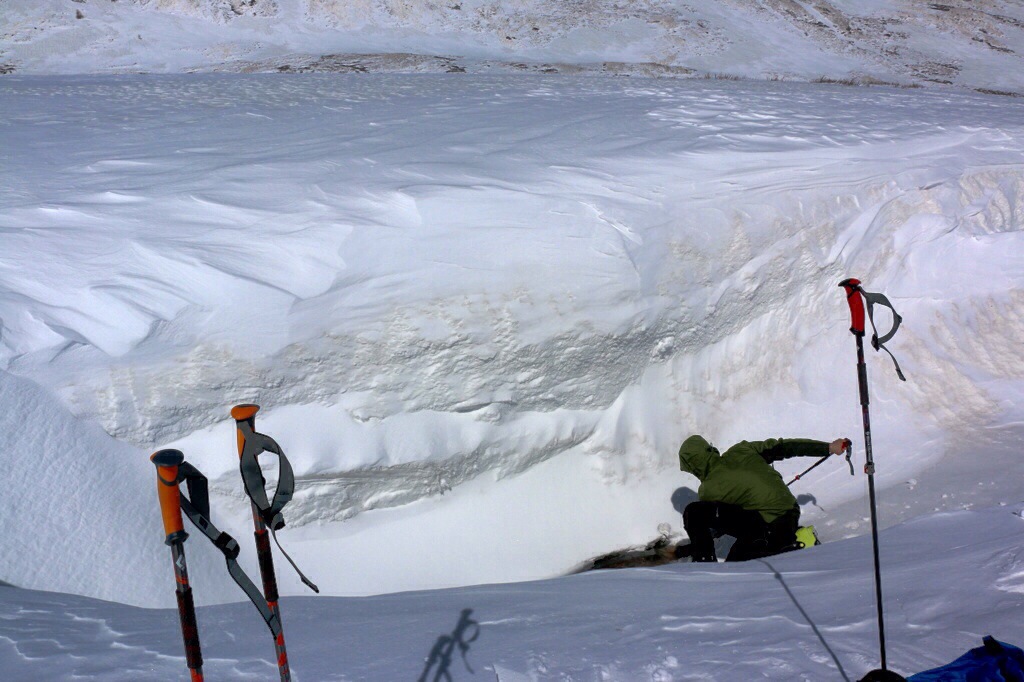 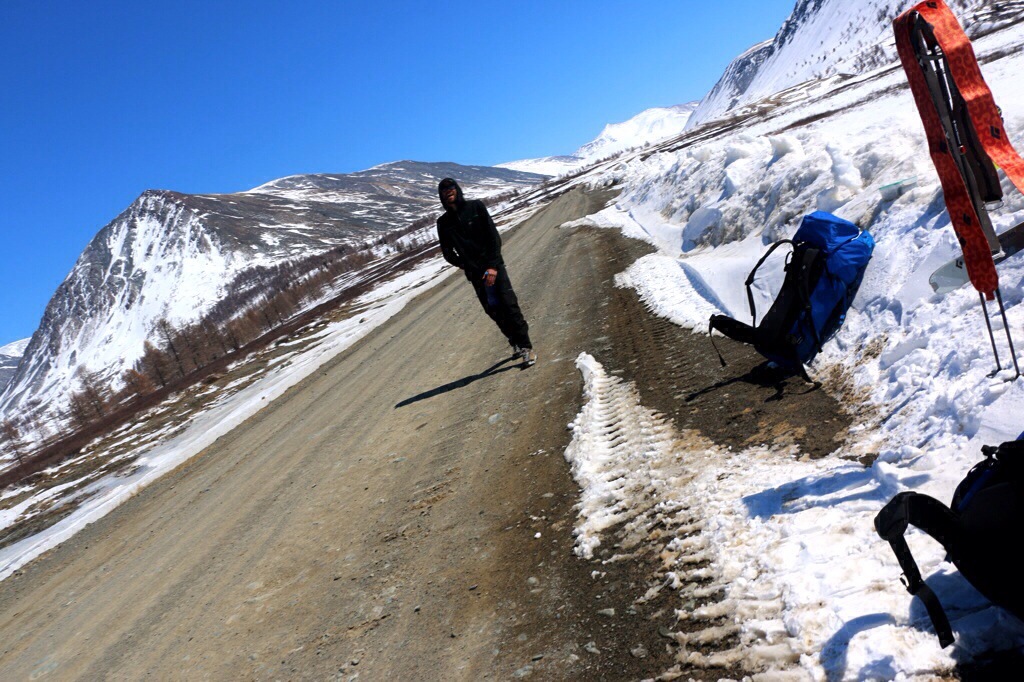 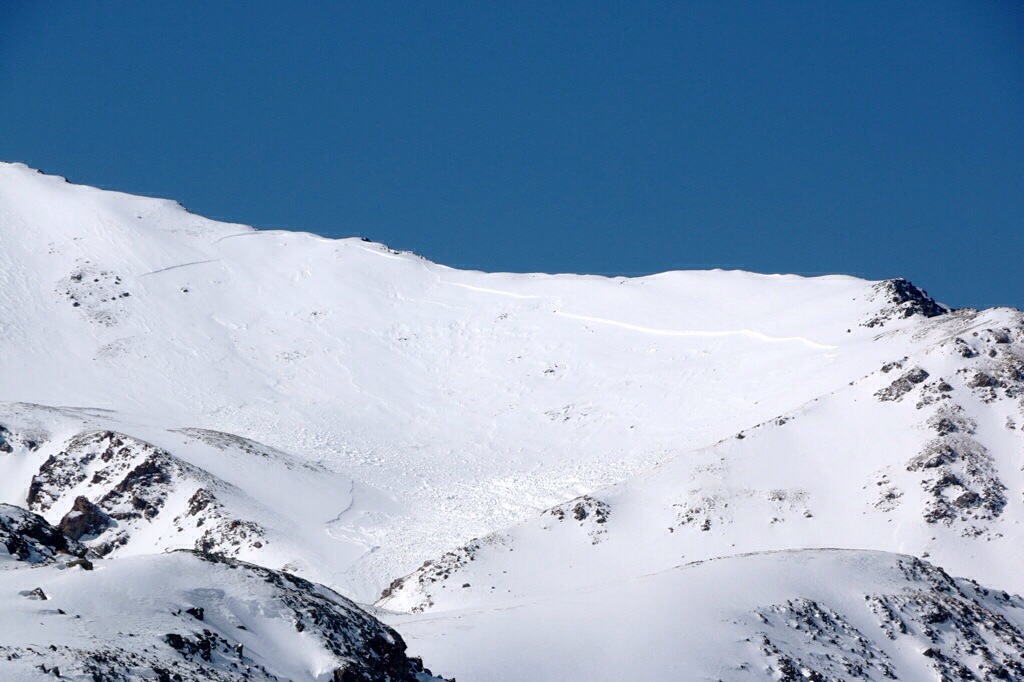 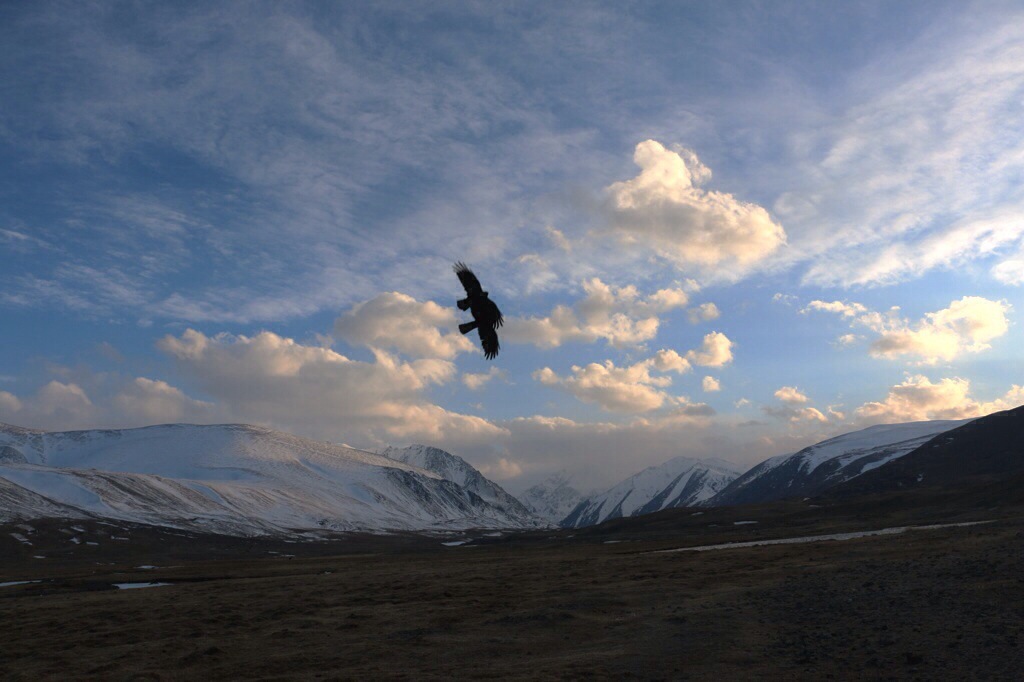