When I first started running my own expeditions, sourcing maps was one of the most intimidating details for me. If you want to hike in the White Mountains or paddle in Maine, you can probably get by with an atlas and gazetteer, or a swing by a local outdoor store for a specialty map. Kazakhstan, rural France, or even more distant places in North America would at first seem impenetrable  without the right tools, and a novice could have trouble finding those tools. To be clear, I am talking about paper maps. The ability to read terrain and landmarks, and associate them with features on a topographic or physical map printed on paper is the key skill in expedition navigation, both in the front country and the wilderness. GPS and digital mapping technology are neat party tricks, as are compasses, but without a good paper map, you are not set up for success. Polar explorers, offshore sailors, and aggressive sea kayakers take note: I’m not talking about you. GPS and compass work is often requisite for their work. For other endeavors, you must rely on the reliable: paper won’t run out of batteries, it will never fail if taken care of, and its tactile utility will always give you a better sense of your place in the landscape than any digital crutch.

Let’s talk briefly about map scale, and then I’ll share some information about where to find maps in North America and what tools we are using in Central Asia. First, let’s focus on the heart of the Altai: Belukha. This glaciated massif rises on the Russia / Kazakhstan border, and at 4,440 meters  (14,567 ft.), it is the highest peak in the range as well as being a spiritual and geographic center-point. Using this reference point, we can talk about scale and mapping solutions.

Our Mapping Solutions
When I went across North America in a canoe, I mostly used pages cut from a dozen Delorme Atlas & Gazetteers, all physical maps with some topographic features at a scale of about 1:100,000 or 1:200,000. For areas with  smaller features, like the Boundary Waters, I used 1:50,000 scale topographic maps, both from USGS and from Natural Resources Canada. If I was hiking in a area with ever smaller features, like in southern Utah Canyon country or in tight mountain ranges like the the Wind River Range, I might use even larger scale maps like the classic USGS 7.5 minute 1:24,000 quad maps. Cycling or long distance paddling or hiking could leave you with thousands of sheet, hundreds of pounds, and very high cost. So, we use smaller scale maps when we can.

Every inch of Canada and the United States is mapped and available for free download as .tiff, .jpg, and .pdf. For $2 (b&w), these files can be printed at Staples or a local print shop with a 36″ printer, or purchased for a little more from the online stores and often printed on tougher paper with a bit of fiber in it. US maps are available from the USGS Map Store, while Canadian maps are available from Natural Resources Canada. For us, we need to rely on difference scales for different activities. Cycling happens on a (hopefully) fixed line, so we can use the excellent 1:2,000,000 scale physical / road maps from GiziMap, a Budapest-based cartography company that covers some very out of the way places. We’ll be using their Mongolia and China Northwest maps, along with a Reise Know-How sheet of Central Russia from the Urals to Lake Baikal at the same scale. I bet you could find these map series on Amazon, but I tend to use Omni Map, a local shop in North Carolina that ships across North America and has a detailed, simple website.

For backcountry navigation, we need a topographic map at a much larger scale. Thankfully (now, at least…) the Soviet Union’s Red Army General Survey mapped most of the planet during the twentieth century, and they did it in incredible detail. While you can get better, more up-to-do sheets of, say, Ireland, most of the USSR’s sphere of influence is still using this series or has produced a national update based on it. Getting these maps isn’t actually that hard. Free downloads of most regions can be found at Maps.Vlasenko.Net, while paid downloads of nearly everything can be found at MapStor. MapStor is more organized and comprehensive, but tends to have an annoying watermark on each sheet. The Vlasenko site may disappear at any moment, and their resolution often isn’t as good, but it is free and easy to browse. It is always fun taking a thumb drive into Staples and seeing their reactions, but it is all perfectly legal. Unfortunately, due to weight and availability, we’ll mostly be using 1:100,000 maps, meaning we’ll have to rely on larger features for navigation. Black and white is cheaper, and you can always mark them up post-print.

The Belukha region depicted in a 1:100,000 scale projection from the Red Army General Survey:

And at 1:1,000,000, with nearly the entire Altai Range shown on one map – at least on the full sheet from which this screenshot was taken. 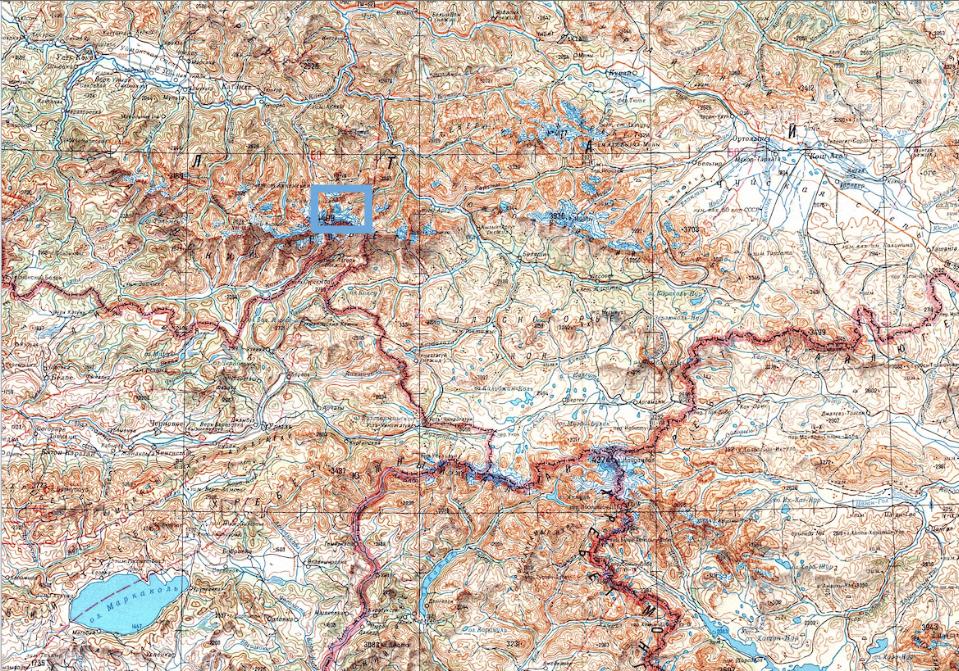 Finally, a detail from one of the 1:2,000,000 Gizimap physical maps we’ll be using for road navigation.